Box Skills is a framework for using best-of-breed artificial intelligence and machine learning technologies from leading providers to process content in Box. These technologies include image recognition, speech-to-text transcription, facial detection, and more. They enable you to extract insights from and add rich metadata to your unstructured data, such as image and media files.

Box Skills is an add-on available only to Business Plus or above accounts.

What is a Box Skill?

Box Skills are bits of code that operate on folders in Box. Apply them to a folder, and a Box Skill automatically analyzes each file placed into that folder, and then writes the output of its analysis as metadata on the file. For example, apply an audio skill to a folder, place an audio file in that folder, and the Skill adds a transcript to that audio file. People can then preview the file in the Box Web application to view the transcript. And the metadata can drive other Box functionality, such as search. 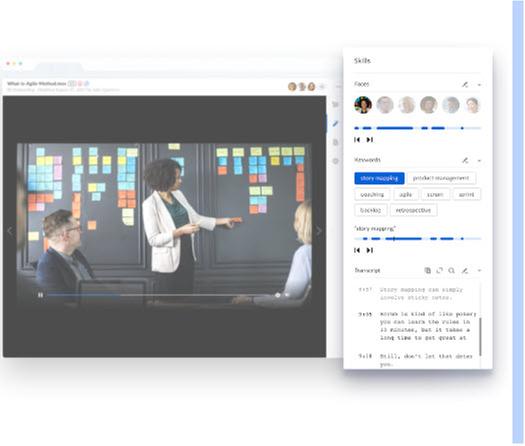 How does a Box Skill work?

There are four main components of the Box Skills framework:

Box Skills execute automatically when a trigger occurs. They use an event payload from Box to process files and apply metadata to those files.

Here’s the end-to-end flow of a typical Box Skill:

Box Skills typically write metadata to files in Box. When you preview a file in Box that a Skill has processed, the metadata that Skill has written displays directly in the Box Web application in the right-hand sidebar. A series of pre-designed cards visualize the metadata. These cards display some of the common outputs from third-party AI/ML services. To display this information, your Box Skill application can write to a pre-built, globally available metadata template that dynamically generates the card.

There are four pre-designed cards:

A Box Skill application can use any combination of these cards, including displaying multiple instances of the same card.